Last week we had Cousins’ Camp at my house.

For this first year, only the two oldest, both girls (potty trained and somewhat independent), got to come. And there really seemed to be a good reason for holding it the week after the THSC convention (the one who lives furthest away flew home with us, helping on travel expenses), but I’m reminded of the saying:

Other than starting off tired, however, we had a good time. We

We finished out the week with a tea party at Tia Rita’s, a trip to the park, and making Cousin Camp T-shirts. (Actually after the bead fiasco, Gram’r decided to do that by herself after the other participants have gone to bed. They put their handprints on the shirts with some wash-up help from Papa. Is that close enough to them doing it?) 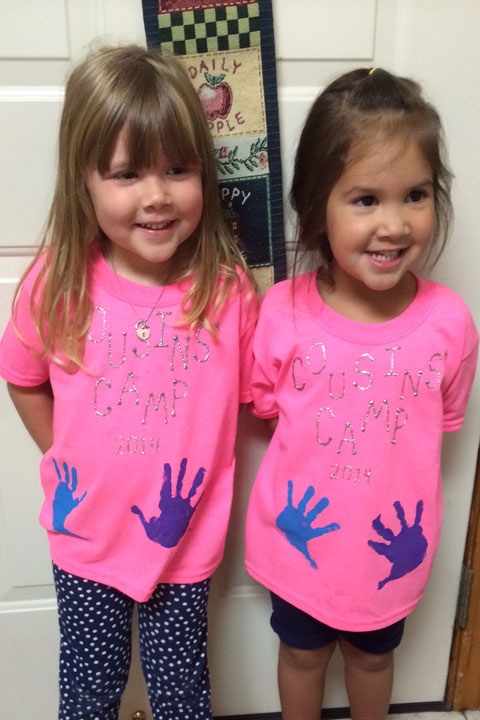 Tim asked me why I was hosting this camp, as it is extra work that I’m rather out of practice doing. (I haven’t cleaned up this many messes in years!) My response was that it’s good for my relationship with them, they get to spend time together, I enjoy being with them, and it gives their mothers a break.

The rest of the answer is that I want to support my children in their efforts to raise my grandchildren in the nurture and admonition of the Lord. I know mothers of small children are very busy (as I’ve been reminded again this week) sometimes just trying to keep noses wiped and everyone fed.

My role model in this is Fanny Crosby’s grandmother. She helped her blind granddaughter memorize scripture after scripture, and Fanny later became one of the most prolific hymn writers in history. Wow! What a heritage!

On top of all that, it’s my privilege!

They’ve now gone home, and it’s quiet around here again. I’ll rest up for a while, and then maybe I’ll be ready to think about more things we can do next time! 🙂

What were your grandparents like? What do you want to replicate for your children’s children and what would you like to do differently?

This post has been a long time in coming! I promised more of these ideas back in July. Ugh. How time … END_OF_DOCUMENT_TOKEN_TO_BE_REPLACED

Have you ever heard the joke about the guy, when asked how often he told his wife that he loved her, … END_OF_DOCUMENT_TOKEN_TO_BE_REPLACED

In my last post I covered the importance of commitment to our marriages. When we marry, we make a … END_OF_DOCUMENT_TOKEN_TO_BE_REPLACED

(Part 2, Happily Ever After?) Remember your wedding day? We can all recall how excited we were, how … END_OF_DOCUMENT_TOKEN_TO_BE_REPLACED

Yes, I know. I told you last week that I’d be addressing marriage over the next few weeks. However, … END_OF_DOCUMENT_TOKEN_TO_BE_REPLACED