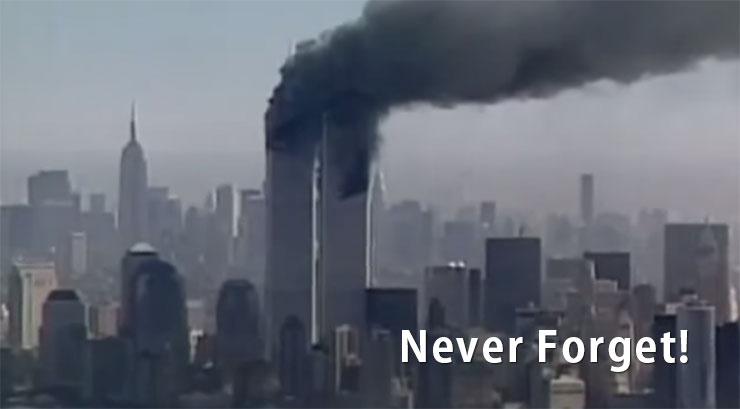 Have you thought lately about how many people don’t really know about or remember the terrorist attack on the United States on 9/11/2001?

Thursday is Patriot Day and the 13th anniversary of 9/11, so anyone younger than 13 years old wasn’t even alive when it happened. Add to those youngsters the people who were so young that they either don’t remember it at all or very well, and you have quite a number of people. I think we can safely say that many people into their early 20s don’t have the memory and/or understanding of what happened on 9/11.

I recently listened to an audiobook, Thunder Dog: The True Story of a Blind Man, His Guide Dog, and the Triumph of Trust at Ground Zero by Michael Hingson and Susy Flory. It’s a true story of Michael Hingson’s experiences on that day. I think reading this book together with your children is a good way to teach them about this part of our history.

I hesitated to get the book when I first saw it, because, unlike those younger people, I remember all too well what happened that fateful day and I don’t handle graphic details about it very well. It still hurts too much.

However, Thunder Dog was a matter-of-fact presentation about one blind man and his guide dog and their experiences together, beginning in the North Tower of the World Trade Center that day. The book is a good way to learn about what happened and what people who were in the buildings did to get out. I myself watched on live TV as the second plane hit the South Tower and thought I was well informed, but I learned some specifics from the book that I hadn’t known about before.

Another plus is that in the process of learning about this horrific event, the reader comes to better understand what blind people are capable of and how to treat people with disabilities. The authors use the literary device of flashbacks to tell a blind man’s story of how he became the man he was on 9/11, i.e., blind, confident, a leader, a humorist, a man of faith, etc. Mr. Hingston tells about his guide dog, Roselle—whom he trusted with his life daily—who led him out of the tower calmly and safely.

You can read the book in print. I listened to it, because that’s how I read most books, so I can multitask. (All of you moms understand that, right? 😉 ) One good thing about the audiobook is that at the end there are two talks about blindness, the second being Mr. Hingston retelling his story of 9/11 to an audience of blind people, which was worth hearing even after reading the book.

I agree with this quote by Edmund Burke: “Those who don’t know history are destined to repeat it.” Even now we have another terrorist group threatening the United States. Our country needs to be strong in the fight against terrorism!

Whatever medium you use, be sure you and yours know the story of 9/11.

To enhance your study of 9/11, check out “Have You Forgotten?” by Darryl Worley. Also do a search on YouTube.com for 9/11 footage and/or 9/11 Documentaries. If you have children, you will want to be careful, for some of the videos have some graphic footage.

This post has been a long time in coming! I promised more of these ideas back in July. Ugh. How time … END_OF_DOCUMENT_TOKEN_TO_BE_REPLACED

Have you ever heard the joke about the guy, when asked how often he told his wife that he loved her, … END_OF_DOCUMENT_TOKEN_TO_BE_REPLACED

In my last post I covered the importance of commitment to our marriages. When we marry, we make a … END_OF_DOCUMENT_TOKEN_TO_BE_REPLACED

(Part 2, Happily Ever After?) Remember your wedding day? We can all recall how excited we were, how … END_OF_DOCUMENT_TOKEN_TO_BE_REPLACED

Yes, I know. I told you last week that I’d be addressing marriage over the next few weeks. However, … END_OF_DOCUMENT_TOKEN_TO_BE_REPLACED