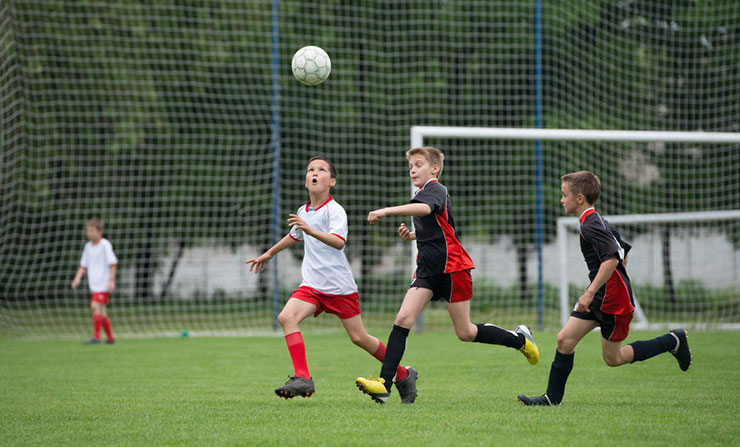 I once read a news story about a preteen whose mother took him to an activity before he went to school and then picked him up after school to taxi him to other activities, and he worked on his homework in the car between functions. His schedule was as tight as that of any CEO of a major company!

Why are we so concerned that our children might miss out? Why do we think they’ll be shortchanged if they are not each engaged in several extracurricular activities? We run ourselves ragged trying to making sure they are socialized/smart/well-rounded, but at what cost to our families and our relationships?

I remember one time when Tim and I had to rethink our family’s outside activities, our busyness, and what we actually needed to do. When our children were in elementary school , we put them in a soccer program. Since I was home schooling and PE was not my forte, we thought soccer would be a good source of exercise for all of them.

It worked well for a while. Their four teams all practiced on Tuesday and Thursday nights, and the games were on Saturdays. I carpooled with a person from each of the girls’ teams, one on Tuesday and the other on Thursday, while Tim took care of the boys. We usually spent Saturdays at the soccer fields, splitting the games between us.

Then one of the teams began to practice on Mondays and Thursdays instead. Peter, our oldest, became junior high age, and his games moved to Sundays. One day we woke up and realized that we were doing soccer five out of seven days a week!

Tim and I discussed it and prayed about it. We determined that soccer was pulling our family apart, so we decided we would no longer participate in the soccer league. In the end we developed a policy that each of our four children could participate in one extracurricular activity a week.

These were hard decisions; our kids were not very happy. They had enjoyed their experiences. You know what, though? They got over it.

What were the results? For PE the kids played soccer with each other in the back yard. We got back to having family dinners together and were not being pulled in so many different directions.

Did my children suffer from not being involved in many different activities? Not at all. They are actually well adjusted adults and productive members of society.

I think parents should ask God about each activity in which our family members are involved and prayerfully count the cost, recognizing that God put those children into our families in part, I think, because He wanted us to be the strongest influences in their lives.

That takes time spent together.

This post has been a long time in coming! I promised more of these ideas back in July. Ugh. How time … END_OF_DOCUMENT_TOKEN_TO_BE_REPLACED

Have you ever heard the joke about the guy, when asked how often he told his wife that he loved her, … END_OF_DOCUMENT_TOKEN_TO_BE_REPLACED

In my last post I covered the importance of commitment to our marriages. When we marry, we make a … END_OF_DOCUMENT_TOKEN_TO_BE_REPLACED

(Part 2, Happily Ever After?) Remember your wedding day? We can all recall how excited we were, how … END_OF_DOCUMENT_TOKEN_TO_BE_REPLACED

Yes, I know. I told you last week that I’d be addressing marriage over the next few weeks. However, … END_OF_DOCUMENT_TOKEN_TO_BE_REPLACED