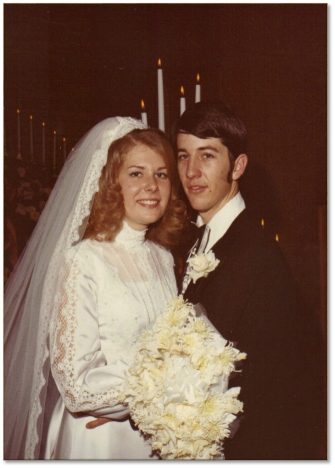 I don’t know how many people besides me have felt this way, but I was afraid of getting married. I guess it wasn’t getting married that scared me, but it was more making a mistake about whom I chose to marry.

Both of my parents were alcoholics. They finally divorced close to their 30th anniversary, but they’d had problems for many years. I knew I didn’t want a marriage like my parents had, but I had no idea how to do any better.

Therefore, I was scared.

I wanted to be married, but I wanted to be happily (successfully) married. Statistically, even in Christian circles, one in every two marriages ends in divorce. On top of that, how many of the 50 percent of those who stay married are actually happily married? [I looked online for some numbers, but they run anywhere from 33-75%. I guess it depends on your definition of “happily.”]

Not too long ago, a young lady asked my husband and me our thoughts on why we had a good marriage. She explained that we were among only a handful of people she considered happy in their marriages; she wanted some hope that a successful marriage could be in her future, too.

We had a hard time coming up with a response off the cuff, and it helped me to realize that there is no short answer to this question. There are many factors involved in having a successful marriage.

Who you choose to marry is important. One should carefully consider a potential mate. You should pray, ask the Lord for His guidance, get input from your family and get wise, godly counsel. A Christian should not consider a non-Christian for a spouse, as God’s word is clear about not being unequally yoked with unbelievers (2 Corinthians 6:14). A Christian woman should seek a godly man who will be her spiritual leader (Ephesians 5:23)

Yet, no matter whom you marry, no matter how great the guy is, there will be trials and problems in your future.* Think about it. A marriage brings two people together who were raised in different families with different ways of doing things, different foods, different jokes, different ways of looking at things, etc. Since siblings having all those things in common often can’t get along, we shouldn’t be surprised that married couples have disagreements.

Even more foundational, when two people who live together are inclined to sin, to be selfish, to want their own way, etc., what else would you expect?

Whom you choose to be and what you choose to do are going to be key in the success of your marriage. Really, that’s where you can have the most impact.  In fact, I hold that we are each the only person we have the power to change.

That is what we’re going to address for the next several weeks on this blog.

*Just to be clear, there will be trials and problems in your future even if you never get married.

For the married:
Am I the kind of woman that the man I want my husband to be would want me to be?

This post has been a long time in coming! I promised more of these ideas back in July. Ugh. How time … END_OF_DOCUMENT_TOKEN_TO_BE_REPLACED

Have you ever heard the joke about the guy, when asked how often he told his wife that he loved her, … END_OF_DOCUMENT_TOKEN_TO_BE_REPLACED

In my last post I covered the importance of commitment to our marriages. When we marry, we make a … END_OF_DOCUMENT_TOKEN_TO_BE_REPLACED

(Part 2, Happily Ever After?) Remember your wedding day? We can all recall how excited we were, how … END_OF_DOCUMENT_TOKEN_TO_BE_REPLACED

Yes, I know. I told you last week that I’d be addressing marriage over the next few weeks. However, … END_OF_DOCUMENT_TOKEN_TO_BE_REPLACED