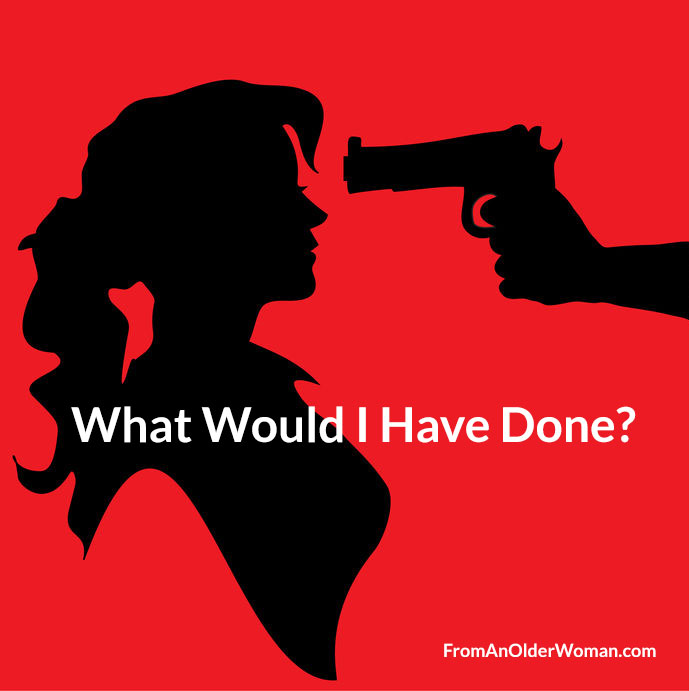 It saddens me that so quickly after I wrote about possible persecution, there was a blatant attack on Christians in the Oregon shooting.*

Have you ever wondered if you would be strong enough to stand for Christ if your life was being threatened? I have.

Lately I’ve been thinking a lot about Corrie Ten Boom, a woman who, for helping Jews in World War II Holland, lost much of her family and was placed in a Nazi concentration camp. I remember a story she told about a conversation with her father that gives me much peace:

“When I was a little girl,” I said, “I went to my father and said, ‘Daddy, I am afraid that I will never be strong enough to be a martyr for Jesus Christ.’

“’Tell me,’ Father said, ‘when you take a train trip from Haarlem to Amsterdam, when do I give you the money for the ticket? Three weeks before?’

“’No, Daddy, you give me the money for the ticket just before we get on the train.’

“’That is right,’ my father said, ‘and so it is with God’s strength. Our wise Father in heaven knows when you are going to need things too. Today you do not need the strength to be a martyr; but as soon as you are called upon for the honor of facing death for Jesus, He will supply the strength you need just in time.’”

I had forgotten that story was in her book, Tramp for the Lord. In Chapter 17 Corrie related this story to encourage a church of African Christians who were facing the very real threat of death for their faith.**

Corrie goes on to tell the Africans about some experiences in the concentration camp. She closed the meeting with the following testimony:

“I knew that every word I said could mean death. Yet never before had I felt such peace and joy in my heart as while I was giving the Bible message in the presence of mine enemy. God gave me the grace and power I needed the money for the train ticket arrived just the moment I was to step on the train.”

What would I have done? I don’t know. I like to think I would have stood for Christ, but God hasn’t put me in that position yet. However, I know that He is the One who loves me, who is in control and is good and He would not allow me to go through something like that alone.

I also know that the bold stand those people in Oregon took for the Lord is a real testimony and encouragement to me! I pray that their very costly testimony will bear much fruit!

*Did you know that the people were shot because of their religious beliefs? Some news outlets didn’t tell that part of the story. If you want more information, read the account of one of the survivors of the attack.

**Thanks to my sweet friend Terry who researched and found the quotation for me!

Do you truly believe that He is worth living for? What about worth dying for? Does the thought of being persecuted, yourself or your loved ones, for Jesus’ sake trouble you?

Look to the Lord and His word! I have found that verses like Romans 8:35-39 give me courage. Look for other such verses in scripture. Memorize them; meditate on them; make them your own.

This post has been a long time in coming! I promised more of these ideas back in July. Ugh. How time … END_OF_DOCUMENT_TOKEN_TO_BE_REPLACED

Have you ever heard the joke about the guy, when asked how often he told his wife that he loved her, … END_OF_DOCUMENT_TOKEN_TO_BE_REPLACED

In my last post I covered the importance of commitment to our marriages. When we marry, we make a … END_OF_DOCUMENT_TOKEN_TO_BE_REPLACED

(Part 2, Happily Ever After?) Remember your wedding day? We can all recall how excited we were, how … END_OF_DOCUMENT_TOKEN_TO_BE_REPLACED

Yes, I know. I told you last week that I’d be addressing marriage over the next few weeks. However, … END_OF_DOCUMENT_TOKEN_TO_BE_REPLACED